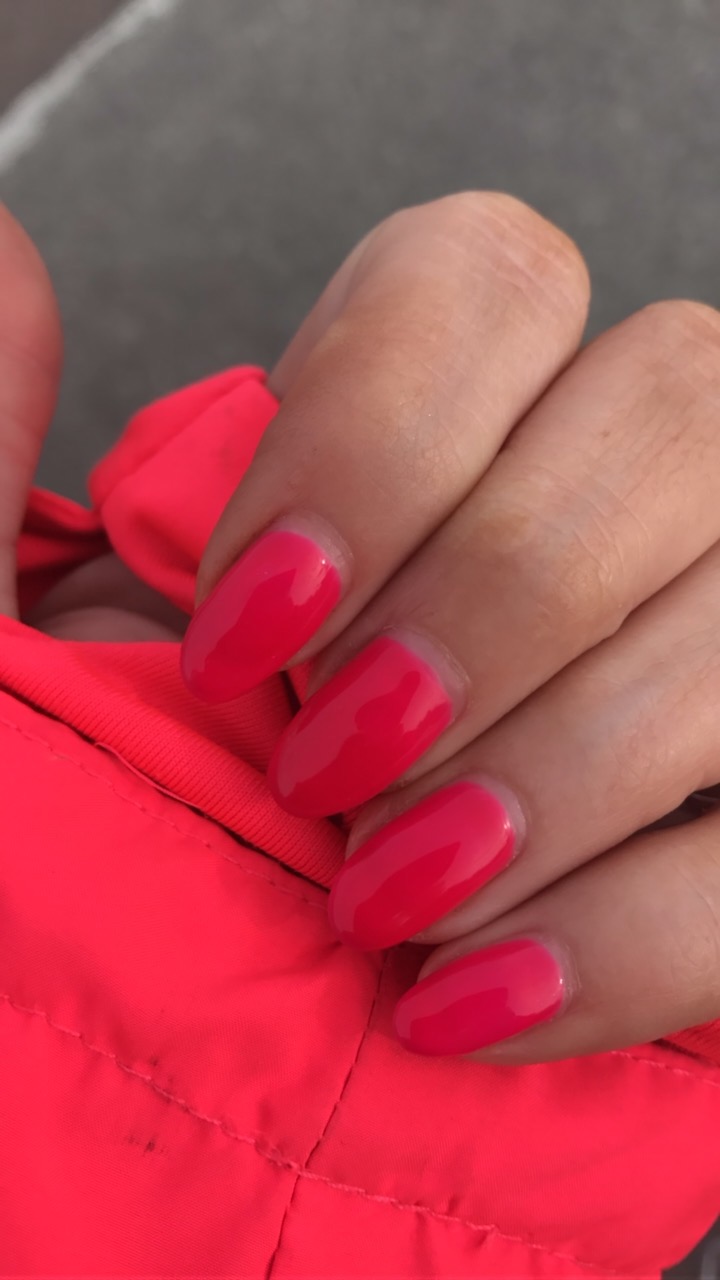 Two week manicures are quite honestly the only thing I really ever do to my nails. For me they are low on commitment and high on impact because I like looking groomed. That means neat polished nails. It’s also something to do with having someone else do them and then I can forget them and come back to them again.  I’m lucky that my hair and nails grow quite quickly and despite having regular application and removal of either OPI , Shellac or Gelish for the last five years or so my nails are not brittle or damaged. In fact annoyingly at times I have to take a scissors or clippers to them. The day job means that I can’t let them get too long. But for holidays I decided to let them grow.

I have had gelish with varying degrees of success over the years. It honestly had never really been my favourite because I had found it not to last as long, and as a service it was always around a fiver more, I’m not mean about spending money on treatments however I always a felt a little hard some by, Gelish is marketed as a three week, but when the nails grow quickly I’ll only ever really get the fortnight from them. The colours though for me were always the most vibrant and I do own quite a few Morgan Taylor ( the non soak version ) for my toes.  I love the selection and the glitter will always catch my eye. The pastels are lovely and the nudes glorious. Glorious nudes … there’s a thought.

Mollie is the latest addition to the team in City Wax having moved here from the UK. So my first Gelish was with here. She’s friendly chatty and super quick at application. The vibrant coral you can see above is her work , directly after applying and a week into the treatment. You can see the cuticles are perfect and City Wax don’t ever cut your cuticles something I’m grateful for after one incident where I ended up with bloody ones after someone took a scissors to them, that by the way is neither good for your cuticles or hygienic from a blood perspective. Thankfully Mollie was a great therapist that is just brilliant and really confident with nails.

My second set of Gelish came from Chloe, my pedi girl from a few weeks ago. She loves nails and is so passionate about her job. The red ones are her work. She’s a great therapist too and her pedicures are her strong point. My pedicure file and polish lasted four weeks.

Gelish or any two week service will only work for you if you look after your nails. By that I mean rubber gloves when you’re washing up or using chemicals on your hands. We should all be doing that anyway. A bit of cuticle oil every day and correct professional removal. Yes don’t peel it, book in and have  it removed. Most places offer removal for a tenner or less.

Overall the services have improved my thoughts on Gelish, it’s been a few years since I had the service  I think perhaps previously I had booked in to a salon that operates a more strict time policy for it. Curing time is less but the attention to detail hadnt been there. It was a conveyor belt type service which is fine for some a lunch time appointment . So I’m back to actually liking it now. Where services like this are concerned you really need to try it again before you make your overall decision.  I’m currently working my way through the whole City Wax menu and every service I have received I have been happy with. It’s taking a while to get the blogs up because I just wanted to see the average over two of the Gelish before I decided I really liked it. So rather than be rash and rush into a post I like to sit back and look at the overall picture.
What will I try next?

iThere are no comments

This site uses Akismet to reduce spam. Learn how your comment data is processed.

Begin typing your search above and press return to search. Press Esc to cancel.